Did you know that once, in the era of the Late President Ferdinand Marcos, one of his projects included an anti-typhoon rocket to prevent the storms here in the Philippines? An anti-typhoon rocket you say? What is this? Basically, the purpose of the anti-typhoon rocket is to weaken storms. As many know, the country is typhoon prone. There are many people devastated with a lot of casualties and properties damaged every typhoon season. In the days of the Martial Law under then President Marcos, they formulated the Rain Weather Stimulation and Modernization Program. The process is to send F-5 Freedom fighters up the air and throw some silver iodide amidst the storm which is entering the Philippine Area of Responsibility.

The goal is to weaken the entering storm in the country. This project though did not us through. The project was headed by the Philippine Air Force Col. Ramon Macabuhay. According to several publications, the anti-typhoon rockets are similar to the missiles that can be found in war fares but the aim of this is to weaken the storm coming to the country. Half pound of the substance will be placed in the wooden head of the rocket then will be dispersed if needed. 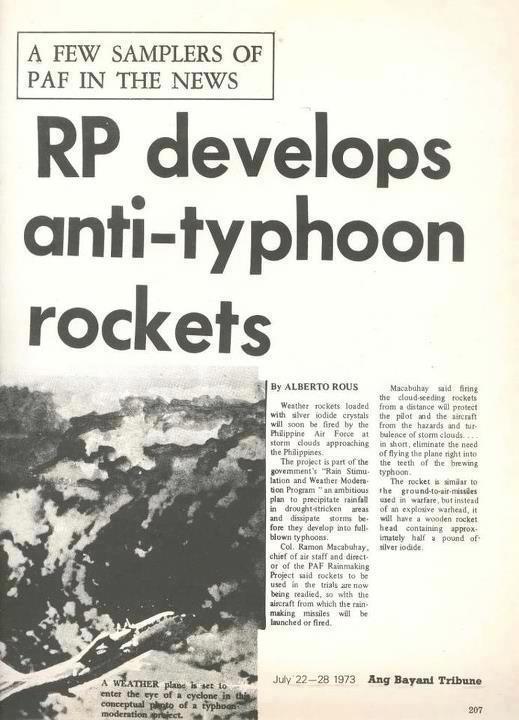 In reality, there are more hidden and know shelved projects of the late dictator. He aimed high for the country and some of his forgotten projects include military equipments and projects. He sees the Philippines as a country that has lot of promises in terms of resources, finances and stability. Today, the forgotten project about the anti-typhoon rocket is but a vague memory for many. If the anti-typhoon rocket had been effective, this would have been the answer to the millions of damages typhoons in the Philippines do each year. Some of the most brutal typhoons in the Philippine history are Ondoy, Yolanda and Ompong.

To Ban Tricycles and Pedicabs Along National Highways? – DILG