Difficult situations in life can bring the worst in people but there are also instances when it brings out the best. This vendor shows that he chose to look at his circumstance in a different light. The vendor on a wheelchair inspired netizen Sherrylee Molina-Baliano. The vendor looks like he suffered from a stroke. It was difficult for his upper body to move so he redesigned his wheelchair to have features that can be used by his legs. 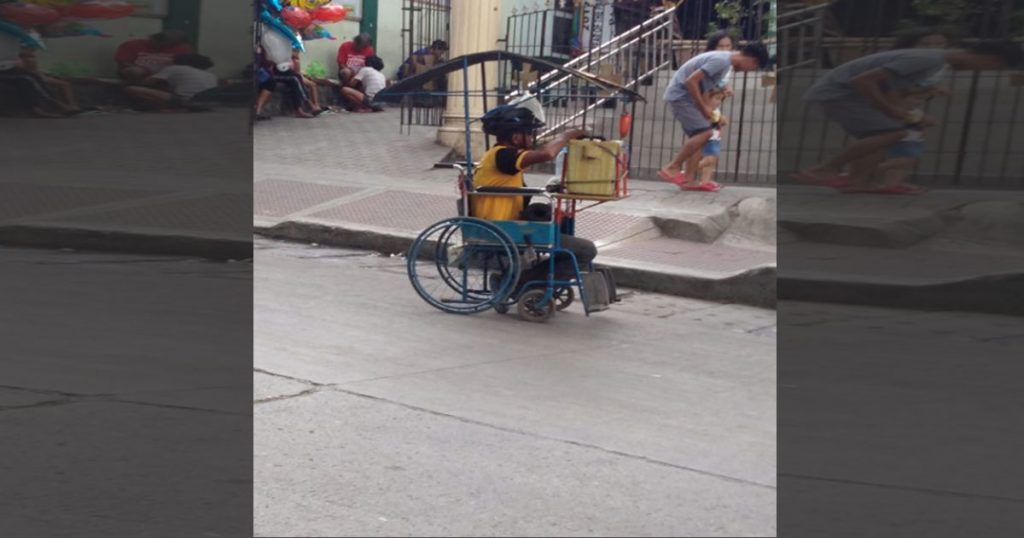 Sherrylee became so inspired by this vendor that she decided to upload it on Social Media. She saw the vendor in front of a church in Tungko, San Jose, Del Monte City, Bulacan. Instead of begging or staying at home; the vendor wakes up each day with a smile on his face and proceed to sell his goodies. What inspired Sherrylee more is how he was able to push his way up the street. Despite his condition, he is able to earn a living. His legs are still healthy and it’s what he uses to navigate the streets he goes to when he is selling his products.

Sherrylee mentioned that people who are losing hope should seek inspiration from him. She said that there is hope as long as you’re still living. She declares her admiration for his hard work and patience despite his condition. Netizens who saw the uploaded photos said that they are hoping someone donates a motorized vehicle that he could use.

Truly, there’s always hope to whoever is willing to give his all. Not giving up has its benefits. This man has every reason to stay out of focus and angry but he makes the most out of his situation. He works hard and he isn’t giving up. Let’s all take a lesson or two from him. May we all try our best despite our problems and don’t ever give up!